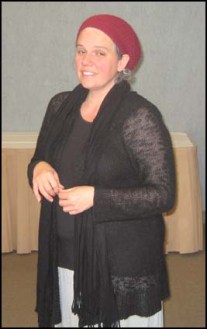 Saturday, April 23, 2016 was an event-filled day for me, and for many other readers and writers in Columbus, Ohio (USA). On that day I had the good fortune of having not one, but two excellent conferences taking place in this city: The Columbus State Writers’ Conference and the Ohioana Book Festival. Both events were free, open to the public and within a handful of blocks of each other. Torn between which event to attend, I opted for spending the early morning at the Writers’ Conference, and the afternoon at Ohioana.

I chose to attend “Poetry Short Forms” for my first session. This workshop, facilitated by Columbus State professor Su Flatt, introduced me to a host of poetic forms I was unfamiliar with, including the triversen, the shadorma, the Burns stanza, and the sijo.

We discussed the advantage of short forms—how they force the writer to get the point across in limited lines, words, sometimes in limited syllables. Then we each chose one or two of the forms to experiment with. It was a lot of fun, and now I’m feeling inspired to play with many of these newly-discovered poetic forms, and maybe even invent some of my own.

During the session I chose to work with the cinquain. There are several varieties of the cinquain; Su showed us a typical version. The first line is one noun that encompasses what the poem is about. The second line is two adjectives that describe that noun. The third line consists of three gerunds that explore the noun further. The fourth line is a sentence that expresses feelings about the subject. And the fifth line is a single word synonym or other word that references the subject.

Here is the cinquain I came up with:

Check back soon for more on both the Columbus State Writers’ Conference and the Ohioana Book Festival!

Morgen 'with an E' Bailey

Transformed Women Who Brought Us To Where We are Today

Co-author of Mapping the Valley